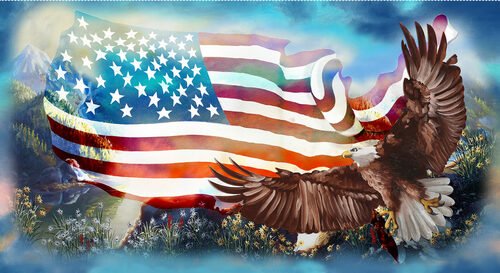 This collection captures the fierce beauty and independence of the great eagle, a symbol of strength and freedom to all. It also includes a panel with the American flag and bald eagle, composition with a four-pillow fabric panel, a scenic, a flying eagle, a cloudy texture, a poetic word stripe, a packed flag and a star print. All these prints are coordinated in traditional red, white and blue colors.

D. "Rusty" Rust was born in Erie, Pennsylvania. He began drawing and painting at a very early age and has never had the desire to be anything other than a serious artist. His early work was directly influenced by his grandfather, Emil Rust. However, he feels there has been no single influence in his wildlife art and insists that all wildlife artists have influenced his style. For many years, Rusty's paintings concentrated on circus and portrait subjects, but recently, wildlife subjects have intrigued him more and more. His portraits include such prominent individuals as: Emmett Kelly Sr., Emmett Kelly Jr., Merle Evans (Ringling band leader), Norman Rockwell and Molly Rockwell. In fact, D.L. Rust and Norman Rockwell used to correspond regularly.  In one letter, Rockwell emphasized that Rusty's artwork "is very good indeed." Rust's paintings hang in the Ringling Museum of the Circus, Sarasota, Florida; the Norman Rockwell Museum, Philadelphia, Pennsylvania; and the National Portrait Gallery of the Smithsonian Institution, Washington, D.C.

Rusty's ability to capture nature lies between fantasy and reality. Realism is his style, but he wants to take the collector's imagination one step further. He is an artist sensitive to nature and its surroundings. The beauty of his artistic documentation is distinctly his own. Rusty takes us not just to a creative visual, but to a place and a story. Rusty has produced and sold over 17,000 paintings and has 2,000 originals registered by owners with the National Museum and Gallery Registration Association (an NMGRA record!).